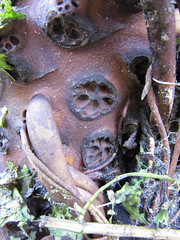 It’s true for anything else that grows. Everything is rooted in soil (dirt). The earth. The unknown underground or under water. Allusions to Hades surely. Allusions to the unconscious. to night. all of it is life.

all is sacred –
the mud, the roots, the leaves,
least the lotus