I’m touchy = I’m defensive. Rising above the situation? Hey! Who do you think I am? Buddha? Jeez, if only!

Don’t know where I found it. This broken marble. Maybe it was in the road, where the hole is forming in which cars can get stuck if they’re not careful. I’ve been in cars that talk back so I know it’s the cars that have to be careful! I also know I’ve been digging around the hole to see how far it will go before it resists. It’s important these things.  Any hole forming, anywhere, any time,should be tested (or touched [on])  to see it’s potential for growing.

My brother had a hole in his foot which grew and grew and they had to cut off his little toe to save the whole. The situation with my brother is somewhat touchy and I won’t explore this hole any further. It resisted.

Maybe I was in the veld. Exploring. Often looking up at the sky to see if I can see the hole in the ozone layer.  Through it, the scorching sun bearing down on all of us. Industry isn’t going to stop to explore this particular hole the world (and its commonly gullible people) finds itself in. [I can just hear them: who do you call gullible? Save it darling: we all are.]

Wholeness: I’ll leave it for a next exploration. Something I’ve been working towards. There’s this medicine bottle I found some time ago, clogged with mud; its emptiness, thereby its usefulness, (thanks Lao Tzu) to be plumbed. Meaningful peace – now that will be something!

Maybe I was in the garden, digging up the daisies. Daisies! Nothing but a weed! Clogs up everything so it won’t grow. The thorn tree grew a mile upward, reaching to the sky in a day since it’s been unclogged from daisies. So did the sacred bamboo – shot out new shoots nearly as high as my head — I’ve made up my mind, I found the three-quarter big marble in the garden, digging up the daisies. A three-quarter marble, or two thirds if you like, sum of its whole.

A marble lost because one has to grow up and function in a man-made hole, world I mean, is a marble found, unwhole, but evidence of what once was, or could be peaceful still in all its heartily scruffy brokenness. 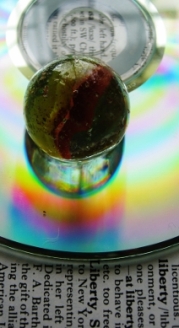 24 thoughts on “The Broken Marble”